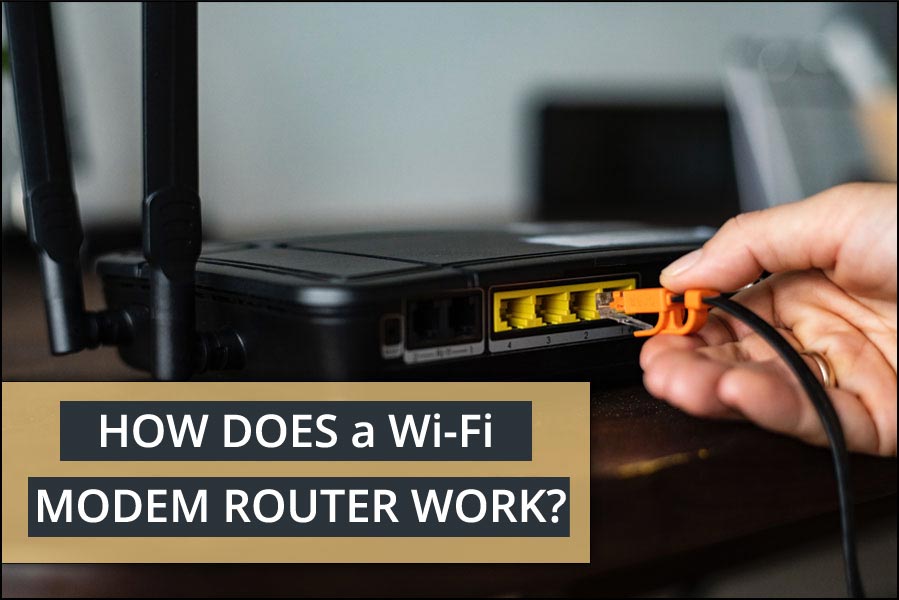 Wi-Fi is the acronym that perhaps we encounter more easily: public roads, clubs, offices and of course our home use the Wi-Fi system to connect computer devices to the network.

Wi-Fi means Wireless Fidelity, or Loyalty without Cables: computers, smartphones, tablets, smart TVs, IoT (Internet of Things) devices are connected not through the cables we are used to, but through radio waves.

The device that generates these radio waves is the Wi-Fi modem router.

So let’s see what a Wi-Fi router is and how it works.

Let’s start by clarifying a point that is not always known: routers and modems are not the same thing.

The modem, which has existed since the 1950s, takes its name from a combination of the terms “modulator” and “demodulator”, as its task is to convert analogue impulses into digital ones (and vice versa).

It is therefore used to receive digital data from the analogue telephone line. To connect to the internet, more simply.

And what is a router instead? Router literally means “router”, and its function is precisely to convey and regulate the data traffic present on the network it deals with.

To make a long story short: the modem can connect the home PC to the internet via a telephone line, but only a router can manage the digital data flows that cross the ether. This means that the router can only connect several devices to the network, regulating their range and traffic.

So why are we talking about Wi-Fi modem router? Simply because to date almost every modem on the market is equipped with Wi-Fi technology, which allows it to be able to overcome the functionality of the router.

The Wi-Fi modem router is therefore an optimal solution for the home network, which allows at the same time the connection to the telephone network and the connection of the various devices within its range.

How does the wi-fi modem router work?

But how does a Wi-Fi modem router work? A Wi-Fi network is a subset of the available radio frequencies; in particular, Wi-Fi technology uses two frequencies, that of 2.4GHz and that of 5GHz.

Traveling on these frequencies, the Wi-Fi router device transmits to all connected devices a data packet that contains the identification of the internet (called SSID), the internet security protocols and the data of the transmissions.

The router transmits these packets, called beacons, every 100 milliseconds. In doing so, the devices recognize the wireless network to which they are connected and recover the attributes they need to surf the internet and to make the various devices communicate.

The most common Wi-Fi standards are as follows:

As is obvious, Wi-Fi ac exists only in the latest generation modem routers, the so-called dual-band or tri-band, which can operate on both 2.4 GHz and 5GHz (accessible only from Wi-Fi ac).

Generally, manufacturers and vendors of telephone contracts focus their marketing strategies on the speed of the Wi-Fi modem. But does it really make sense?

First of all, it is good to consider that between nominal and effective power there are several polluting factors: the telephone operator, the quality of the network and the physical wiring, the network traffic can significantly affect the actual speed of the connection.

A further increase in the performance of a Wi-Fi modem, to date, could be really useful only if we make the network a specific use. If you do not use the PC for gaming, mining, or the frequent transfer of very large files, it is very likely that a faster connection speed will serve you nothing.

An element to consider, rather, could be in the reliability of the vehicle. Imagine a super-fast and powerful connection that crashes every quarter of an hour. It’s probably a far worse scenario than we might have with a medium speed, or slow ADSL modem.

If we started to take for granted the presence of a Wi-Fi network around us, it would be good to consider stability as a priority, plausibly more important than the super-speed connection.

What does the functionality of a router depend on?

Once you see what a Wi-Fi router is and how it works, which we have seen in almost all cases coincide with a Wi-FI modem router, let’s see what criteria can guide us in investigating its reliability.

What features to consider?

So let’s not be fascinated by stratospheric speeds or captivating designs, if what we want from our modem is that it has a long life and optimal operation.

Now that we know what a Wi-Fi modem router is and how it works, and what are the criteria that determine its functionality and quality, let’s move on to some last useful considerations.

It is good to know that the signal of a modem router covers an area between 50 and 100 meters. However, this signal can be implemented with devices such as access points and repeaters, for which Ethernet and USB ports will be useful. Even if our home is not served in an excellent way by the telephone network, in short, data routing and connectivity can be “helped” with the necessary skills.

In addition, it is good to remember that the Wi-Fi signal is disturbed by objects that stand between the modem and the various associated devices. In particular, radio waves fear water, so avoid placing bulky plants along the possible signal paths. However unsightly, therefore, it will be a good practice to place the modem in a high and isolated position, and with the antennas directed towards the most used devices.