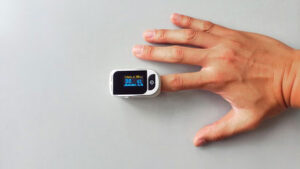 A pulse oximeter is an instrument that allows you to detect the level of oxygen in the blood.

In fact, learning how to use the oximeter is important precisely in reference to those pathologies that are characterized by a lack of oxygen in hemoglobin.

Furthermore, with this instrument, it is also possible to measure the heart rate, expressed in beats per minute.

Relatively simple to use, it actually hides pitfalls.

For example: did you know that the oximeter does not work if you wear nail polish?

And that’s why we have prepared a mini-guide on how to use a pulse oximeter for you.

How it applies, how it is read, and what is the data obtained from it.

You just have to get comfortable and continue to follow us.

How a pulse oximeter is made

Before going to understand how an oximeter is used and how to read, let’s briefly see how this instrument is made. We have said that it is easy to use. This means that you don’t need a professional to use the oximeter, but you can do it from the comfort of your home without any problems. We also add that the measurement, as well as being easy, is painless and suitable for everyone.

The outer body of the oximeter, called the probe, is shaped like a caliper. It is usually used by applying it just like a forceps on a finger, on the earlobe or, for very young children, on the foot. For professional pulse oximeters, which perform a constant reading, it is used instead to keep the clamp still with patches.

The clamp contains the optical unit that sends the bright flashes and detects the related data. These are subsequently processed by the indoor unit, and the result appears on the display which is usually located on the top of the oximeter.

How is a pulse oximeter used?

As we have already told you, the oximeter is very simple to use. Simply insert your finger into the caliper and turn it on. At that point, it will be sufficient to remain still for the time necessary for the machine to process the data, which is usually less than a minute.

For the detection to be correct, however, it is necessary to take some precautions:

Typically, detection takes less than a minute, so it’s not too inconvenient. The best thing is to sit upright and put your hand on your leg, so as to remain still and get the most accurate detection possible.

The diffusion of the oximeter has raised (also) a theme related not only to how it is used but also to how it is read. In a nutshell: we know how to use the oximeter as long as it comes to putting it on and turning it on. But then, when the numbers appear on the display, do we really have any idea what to do with them? In many cases, the answer is no.

To better orient ourselves, then, it is good to put together some data. First of all, let’s clarify what saturation is: it is an index that allows you to establish, based on the level of oxygenation, the degree of respiratory function of the individual.

What is the oximeter useful for?

So now we know how to use and how to read the oximeter. So let’s see when it is indicated, that is, in the presence of which pathologies it would be advisable to get one.

A state of hypoxemia can, in turn, indicate impaired respiratory capacity, but also impaired cardiac capacity. This is an important fact, however, especially in subjects suffering from airway diseases, from bronchitis to asthma.

Furthermore, the oximeter works very well as a detector of non-respiratory pathologies, but which involve breathing in an indirect way, such as sleep apnea. And, finally, it is particularly important when living or working in polluted areas, to determine the impact that pollution is having on health.

These are the uses that are usually made of the oximeter in domestic contexts. The professional models, used in hospitals or in hospital facilities, on the other hand, usually have the function of monitoring the patient’s vital parameters in the event of serious diseases or surgery.

A few final tips: advantages and disadvantages of the oximeter

And now, let’s have a more prosaic speech: let’s try to understand if it is worth buying an oximeter. Our answer is definitely yes. It is a tool that is easy to use, so much so that anyone can, and also easy to read. It does not require the help of a professional and is extremely fast.

In addition, the ability to also measure heart rate, and not just blood oxygenation, makes it useful for various measurements. And last but not least, the measurements are non-invasive and do not hurt, so much so that the oximeter can also be used on newborns.

The only disadvantages concern the fact that there are specific pathologies or conditions that make the detection unreliable. For example, peripheral vasoconstriction, that is when there is poor circulation involving the hands and feet. But also in cases of anemia, or when treatments based on methylene blue have been made.

These aspects, however, make it advisable not so much not to get an oximeter, but rather, if you are in the presence – or suspected of being – of these pathologies, to consult with your doctor before purchasing. And now: good detection!